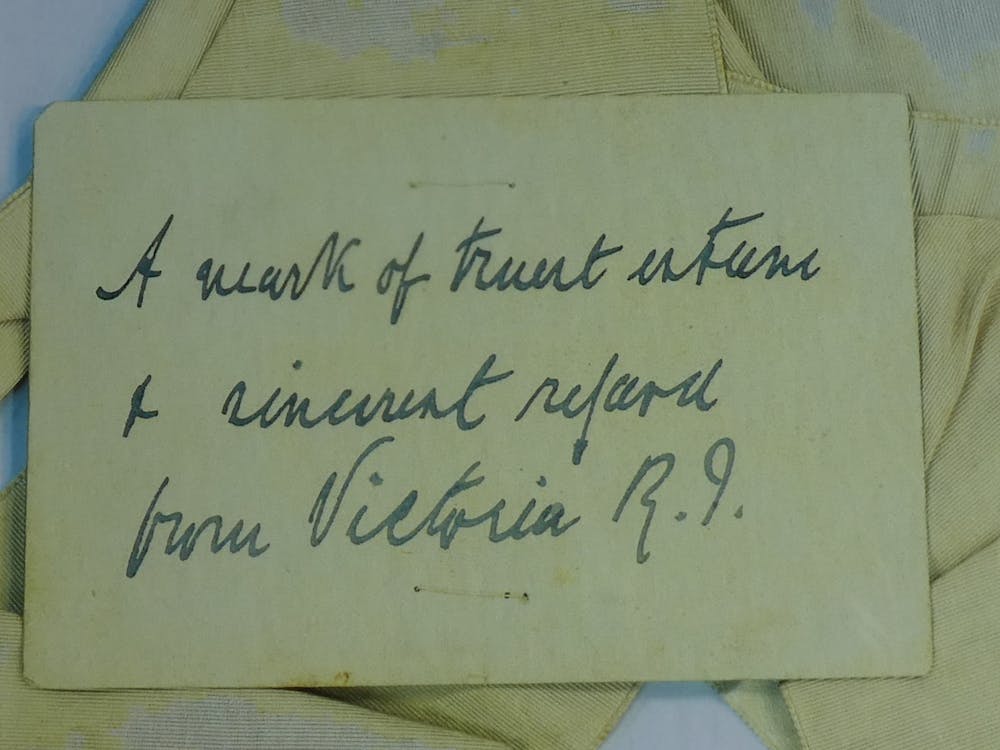 Little known links between Queen Victoria and the first Bishop of Wakefield unveiled days before her 200th birthday.

He was the Bishop commissioned to pen her Majesty a hymn for her Diamond Jubilee and she, the Queen who gave Wakefield its city status.

A card of condolence written by Queen Victoria and attached to the wreath her representative, Lord Cecil presented at Walsham How’s funeral in Whittington, Shropshire, has been discovered in Wakefield Cathedral. The card, handwritten, reads: A mark of the truest esteem and sincerest regard from Victoria RI

The card had been framed alongside a fragment of the wreath that was laid on the day, and was presented to the historic Diocese of Wakefield in 1997 by Walsham How’s great granddaughter on the centenary of his death. It is now on display beside his effigy.

Walsham How was the first Bishop of Wakefield when he was asked by Queen Victoria’s son (Prince Albert) to write a special hymn for the Diamond Jubilee which could be sung in churches at home and across the Empire which at that time, the late 19thcentury – represented a quarter of the population.

Walsham How was a great writer of verse and also wrote a number of hymns – his most famous is For All The Saints which is regularly sung in Wakefield Cathedral. He died while on holiday in Ireland in August 1897 – just months after writing the Diamond Jubilee hymn.

Said Gillian: “I stumbled across this framed picture and it was the handwritten card that inspired me.

“It was obvious that Queen Victoria had a fondness for our first Bishop and it was then I began to research and discovered he had in fact been asked to write her a hymn to celebrate her Diamond Jubilee that could be sung throughout her Empire, ‘ she said.

The Diamond Jubilee hymn – O King of kings, whose reign of old hath been from everlasting - was set to music by Sir Arthur Sullivan and was described by Queen Victoria in her diaries as “a pretty and appropriate hymn” and “a beautiful special hymn” She asked for it to be played every week for her.

Said Gillian: “He was the Suffragan Bishop of Bedford during the 1880s and spent a lot of time ministering in the East End of London which is when Queen Victoria would have first met him.

“He was known very much as a bishop of the ordinary people and in the East End he became the inspiring influence behind a revival of church work founding the East London Church Fund, championing children’s rights and creating a Deaconness Community to encourage more women's help for the poor in the huge parishes of his Diocese.

“This ministry would have captured her attention as she too had a heart for the poor and vulnerable,’ she added.

“Writing in her diary of 10 August 1897 on hearing of his death, Queen Victoria refers to him as: Most charming excellent man. The good excellent Bishop of Wakefield of whom we were so fond.

“Elsewhere in her diaries I found she refers to the hymn with the words: It is so touching particularly now the good kind bishop of Wakefield who wrote it, is gone.”

“It’s exciting to think that the Queen who granted us our city status and made this Cathedral, had such close links with our first Bishop here.

“It brings history alive and makes it so much more inspiring when you can find solid links to the past,’ she added.

Gillian will be on BBC Radio Leeds Breakfast Show this Thursday talking about Wakefield Cathedral’s links with Queen Victoria on the eve of what would have been her 200thbirthday.

And during half term she will run a free family fun activity drop-in that will explore Wakefield’s link with Kings and Queens through arts, crafts and activities.

FREE FAMILY FUN DROP IN: QUEENS, KINGS AND OUR CITY