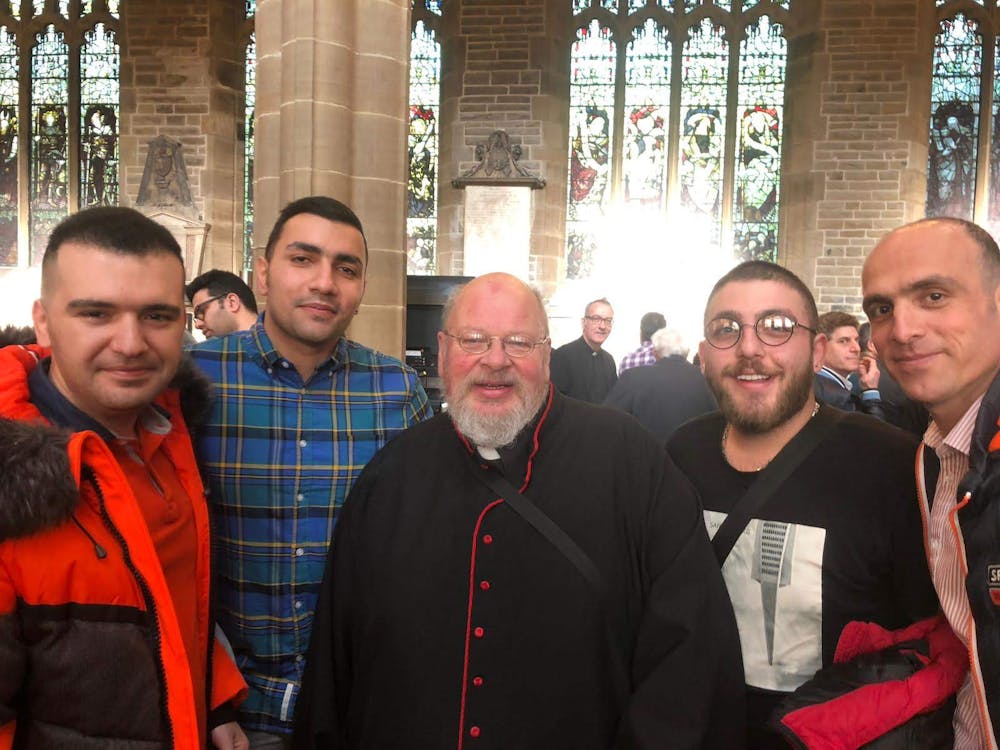 Four decades of ministry in the Wakefield area will come to an end later this month when Canon Tony Macpherson, his wife Lynne and the family leave the city and the region and heads for the rugged coastline of Northumberland.

He talks to Jane Bower.

Last month’s ordinations in Wakefield Cathedral were a sharp memory for Canon Tony Macpherson, the Sub Dean there.

For, on the exact same day in the same place, 39 years ago, he was first ordained deacon and now, almost four decades later, he is preparing to say goodbye to the cathedral community, the city, the diocese and the region to serve three parishes in Northumberland.

Wakefield Cathedral has changed a lot in that time. The pews are gone, the stained glass windows bright and newly cleaned, the whole space opened up, refreshed, renewed to better serve today’s church; but its inclusive welcoming heart, remains the same and Canon Tony has been at the very core of that.

It is his pastoral ministry that has defined his time throughout his four decades in what was the historic diocese of Wakefield, now the Anglican Diocese of Leeds.

In those four decades, Tony has never strayed far from Wakefield, a curacy in Morley and Churwell in the early 1980s; rural Penistone from 1983 to 1988, Grimethorpe, just in time for the closure of the pit there in 1993. Then, into the city for St Michael’s, Westgate from 1995 when he also picked up Chaplain at Wakefield Hospice, Rural Dean and Priest in Charge at St Mary’s, Horbury Junction before arriving at Wakefield Cathedral in 2007 as the Canon Missioner for the old Wakefield Diocese. He was made Sub Dean of the Cathedral in 2015 and was Acting Dean for almost a year until the new dean, the Very Revd Simon Cowling was appointed last September.

“We’ve lived in diverse communities, from rural Penistone to coal-mining Grimethorpe, but one thing has always been a constant; and that’s being relational, walking alongside people and their situations where they are.

“In all those places, I have tried to respond to the needs of people in the communities I’ve been, because I think that’s the place of the church.

“We talk about Jesus becoming human so that God could share and transform human life; I believe the church is placed in communities to do that same task, ‘ he added.

Tony had just come back from visiting the hospice; his weeks are full of such pastoral encounters, and he instantly recalls his first back in 1980 when he had been called to carry out a funeral for a twin that had lived less than two hours.

“I remember accompanying her mum to the chapel of rest to look at her baby, and the raw grief of that situation was palpable.

“People might not be overtly Christian but they have suffered a massive trauma, and they just want you there to sit beside them, to listen, and to pray sometimes.

“Pastoral ministry is a great privilege. Whether it’s the closure of the pits or the day- to-day pastoral situations of visiting the sick or being alongside people who have had a tragedy. It’s all the same.

“People can come into the Cathedral with a great amount of brokenness, anxiety, pain. A lot of what I do is sit, listen and pray. Some will come back and some won’t ever come back. But so be it.

“Jesus tells us to go into the places where people are hurting and serve them and that’s all I’ve tried to do,’ he added.

The Church of England has come a long way in the last four decades – there have been undoubted improvements in people’s understanding of diversity and inclusivity. In March this year, Wakefield Cathedral was chosen to host the launch the Church of England’s first Persian language translation of Holy Communion to further engage with the growing numbers of Iranians in its congregations.

Wakefield Cathedral began a ministry for Iranian refugees in 2016 spearheaded by Tony who started twice-weekly Bible classes and a weekly Sunday service in response to the numbers turning up asking to know more about Jesus. Since that time the Cathedral community has gained volunteer vergers, welcomers, kitchen assistants and translators. And last Christmas, a Persian baby, christened Jesus by his parents, was at the centre of the Cathedral’s Nativity service.

Said Tony: “The church has certainly come a long way; not far enough in my opinion when it comes to same sex relationships, but it is remarkable really. There has been massive change and an opening up of ministry to a much more diverse set of people.

“There’s been a greater emphasis on the need and challenge of evangelising. This is really important as less and less people are growing up with an understanding of church; and more and more are feeling less culturally Christian and less part of the Church of England,’ he added.

Tony has also seen a greater polarity in our communities and less acknowledgement of the social contract at the heart of our society.

“The post war consensus that both the Tories and Labour shared was mutual support, the health service, care of the elderly, care of the vulnerable.

“But the last decade has seen a fracturing of that; there are food banks that can’t keep up with demand, real fears about health care, ageing, mental illness and dementia, and the church has responded to that quite commendable,’ he said.

If he’s learned anything in his four decades of priestly ministry it is this: “It’s the people who are here, a lot of my other work as a pastor is simply a different version of that, “ he added.

Tony leaves Wakefield at the end of August to serve a population of 6-6,500 people across the three churches of North Sunderland, Beadnell and Ellingham in the Diocese of Newcastle. His first task will be to encourage collaborative partnerships across the three parishes.

“I’m excited about it, the Celtic and Anglo Saxon saints are there, Christianity in the North of England has its roots there, St Cuthbert died on the Farne Islands.

“It is a noble tradition to build on and live out,” he added.

“And it’s never a one person ministry; I’ve learned that much. It’s all about working together with people, collaborating, sharing.

“At St Michael’s and St Mary’s we worked with Lay Pastoral Ministers to establish a comprehensive group of people doing pastoral care and supporting people; same at Horbury. As Diocesan Missioner, my priority was to get Clergy and Lay people working together to strengthen the mission of the Church.

“And there’s a whole new lot of people to work and get alongside, new communities and that’s exciting.

“It takes the edge of the leaving behind, because that’s what’s hard. It’s the people, you see.

“I have such a great emotional attachment to this place. It’s been part of my life since 1980,” he added.

He will be installed as Priest in Charge in North Sunderland on Wednesday 11 September at 19.30

In addition to worship at advertised service times -

The Revd Canon Mark Oakley has accepted an invitation from the Bishop of Leeds, the Rt Revd Nick Baines, to become Canon Theologian at Wakefield Cathedral. In this honorary role, which he will hold alongside his role as Dean of St John’s College Cambridge, Canon Oakley will support the Bishop and the Cathedral Chapter in their theological reflections and encourage integrity in their discernment and decision-making. Canon Oakley will also be invited to preach in the cathedral from time to time. Commenting on the appointment, the Bishop of Leeds said ’I am delighted that Mark has accepted this significant role in the life of the cathedral’; and the Very Revd Simon Cowling, Dean of Wakefield, added, ‘we look forward to welcoming Mark as our Canon Theologian and to exploring with him the ways in which we can make theology both exciting and relevant for the communities we serve’. Mark will be installed at a special service of Evensong in Wakefield Cathedral on 15 March 2020.