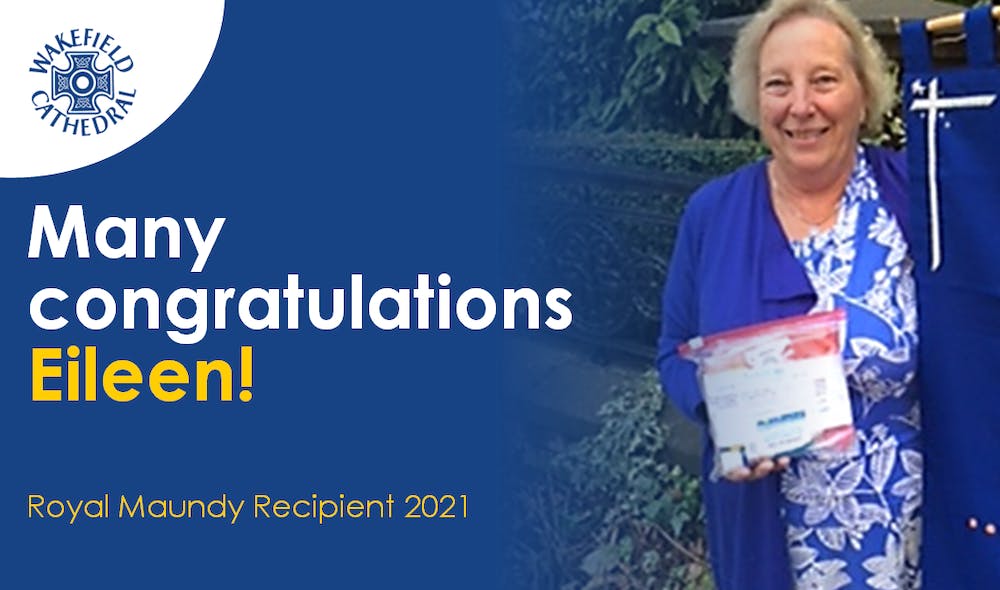 Eileen Warburton has been an active member of the Mothers' Union for over 40 years, but 2021 will certainly go down as being one of the most special of all.

That is because Eileen, who is the current Branch Leader of Wakefield Cathedral Mothers' Union, has been selected amongst many nominations to be one of the lucky 188 individuals to receive the Royal Maundy1.

Eileen, who was born in Derby but moved up to Yorkshire in 1965 to study, spoke of her excitement and surprise upon receiving the news:

“A couple of weeks ago my husband had picked up the post and shouted to me, “There looks to be something special for you in here”, to which I replied, “Don’t be daft!”

“It turned out he was right, a letter from the palace had indeed arrived, from Her Majesty, detailing my successful nomination to receive the Royal Maundy.

“It is a truly humbling occasion for me; the church has been a part of my life ever since I was baptised in 1945, in fact I’ve never known what it is like not to be in a Christian family.

“Faith and worship are the keystones in my life, despite the amount of change and uncertainty throughout the years, particularly evident now more than ever, these keystones have remained the prevalent part of my life, day after day, week after week, year after year.”

After training to become a teacher, Eileen remained in Yorkshire and held a variety of posts within special education - her final post being Head of Special Educational Needs Service within Wakefield EA, a role she loved.

It wasn’t long after beginning her career that she met her husband of 51 years, Malcolm, who is also a Churchwarden at the cathedral.

Speaking about her active role within the church, Eileen added: “I live my faith everyday.

“I truly believe it is the hidden gem within the church, a gem which we need to talk about more, spread the word about the great work that goes on behind the scenes and inspire the next generation to get involved and be a part of something so so special.”

Due to the pandemic, the Maundy money will have to be posted to all recipients this year, with each recipient also being given the opportunity to send a message directly to the Queen, sharing some information about themselves.

“Although it will be sad to not be able to speak with the Queen in person, it is truly humbling to be able to send her a personal message, just thinking about having such an opportunity is such an amazing gift, a gift which I would never have received without the Mothers' Union, without the church and without my faith.

“To anyone considering joining Mothers' Union I would strongly recommend giving it a go. It’s a community which I am so proud to be a part of, it’s a huge part of my life and I would never want it any other way.”

The Dean of Wakefield, the Very Revd Simon Cowling, said: “Eileen is a much-loved member of our worshipping community. All of us at Wakefield Cathedral are thrilled that Eileen’s wonderful service to the church, and especially to the Mothers’ Union, has been recognised in this way.”

1 What is the Royal Maundy?

Each year on Maundy Thursday (the day before Good Friday), the British monarch ceremonially distributes small silver coins (known as “Maundy money”) as symbolic alms to retired recipients who have been nominated for their exemplary commitment to the church.

An equal number of men and women are invited to receive Maundy money, with a man and woman being selected for every year of the reigning monarch’s life (so this year, with Her Majesty The Queen being 94 years old, 94 men and 94 women will be selected).

The ceremony is unique in the fact that it is the only occasion whereby the Queen visits others to give out the awards, opposed to recipients usually coming to her; indeed the Queen has said that she sees the service as an important part of her devotional life.

Each recipient will receive two leather purses, a white one containing coins to the value of the same number of pence as the years of the monarch’s age, and a red purse, containing a £5 and 50p coin.