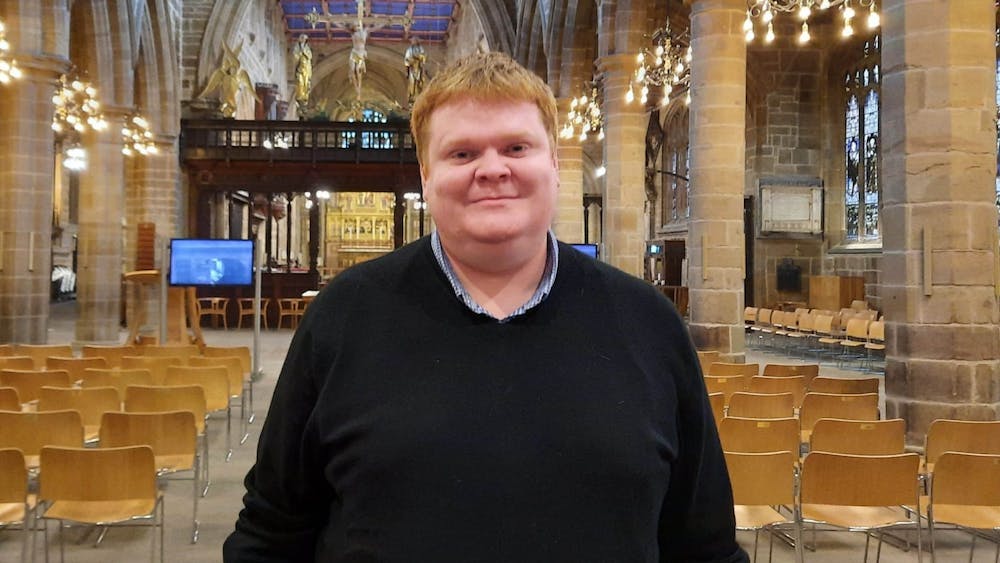 A new face around the cathedral

Visitors to the cathedral over the last few days may have spotted a new face amongst the team.

We are pleased to welcome Ryan Otley who has joined the cathedral on placement as an Ordinand for the next three months, gaining a greater understanding on the world of cathedrals, a different perspective on ordained ministry and experiencing the life of a church in the centre of a city.

Ryan has joined us from The College of the Resurrection in Mirfield, where he is in his third and final year of study, having previously completed a degree in Theology at the University of Sheffield.

Originally from Blackburn, Ryan first became involved with the church around the age of fourteen, attending the social club at his then local St Cuthbert’s Church in Darwen.

During his university days, like many students Ryan had picked up a part-time weekend job, and upon completing his degree realised just how much he missed going to church due to his work commitments.

After Sunday attendance soon resumed, he quickly found himself diving deeper into the church world, taking on a number of additional roles such as under-18’s activities coordinator, safeguarding officer and eventually the role of a churchwarden, all whilst following a career in teaching.

Speaking about his journey so far and joining Wakefield Cathedral Ryan said: “I am really pleased to have started my placement here at Wakefield Cathedral, it’s a wonderful building with so much to offer the city of Wakefield and the wider diocese and a totally different experience to the roles which I have been in before.

“As my involvement grew within the church, friends, family and members of the congregation would often ask if I had ever considered becoming ordained as a priest – the answer at the time was no I hadn’t! It wasn’t until I started exploring a possible vocation that I thought ‘this actually sounds like something I need to consider more seriously’ and I haven’t looked back since!”

Upon completing his placement in the cathedral Ryan is hoping to travel to South Africa on another placement to work with the College and Community of the Resurrection on their missionary work, working on a number of different charity projects and school initiatives. Once his placements have been completed Ryan will be ordained deacon at Petertide 2021 and will serve his curacy in Lancashire at Saint Anne’s Parish Church, Saint Anne’s-On-Sea.

If you see Ryan walking around the cathedral or the city centre in the coming weeks please do say hello, introduce yourself and give him a warm welcome to Wakefield and the cathedral.